There was an orchid last year that called my name and reached out and grabbed me when I walked by. You’ve probably seen them at stores around the area. You see them at grocery stores and home improvement stores and in great numbers in a plethera of colors.

I loved it as soon as I saw it. It was royal blue. I’m a sucker for anything, and I mean anything that is royal blue. I bought that orchid. It was a whimsical purchase; the kind I’ve promised myself I would never make again. But did I say it was royal blue?

The orchid and I got home without any trouble. She was beautiful. Guess what I named her — Blue.

It was inspired by the animated movie “Rio” which I also love. The lead character is a beautiful ‘royal blue’ parrot named Blue. My grandkids love that movie too and the music, oh my goodness, the music. It makes me get up and dance, and you should see my little boys dance with me. It’s just plain fun. But that is for another story, another time.

Blue the orchid had a tag to tell me how to take care of her. I picked up the tag and what do you think was the first thing I read on that tag? Basically, it said to enjoy the colored flowers while they last because, when they grow back on that plant, the blooms will be white. I bought it because it was blue.

It goes without saying, I felt betrayed. But I cared for my Blue without resentment. Her new home gave her southern exposure and lots of light. I tried to make sure she had water when needed but I know she often got dried out and probably thought I wasn’t going to come back.

Then about a week ago, I noticed Blue had a new look. She had two boughs filled with white orchids. 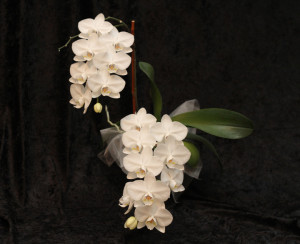 She is just as beautiful today as she was when she was blue. Who knew orchids could be so easy. I may get another one.

Do you have orchids; have you had a similar experience or learned how to take care of them? I just got lucky. What have you learned?

On another note, tomorrow is my wedding anniversary, and when I came home from work, this was delivered. 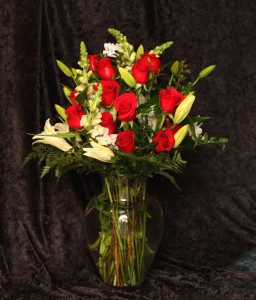 UPDATE (June 11): I’m amazed that my orchid still looks like that picture. It’s been more than two months and the blooms are still beautiful. Not a one has fallen.

One thought on “The Orchid”