Lt. John Tarwater as seen during World War II in one of the many varied planes he flew as a carrier pilot.

one story about a WWII Navy pilot for Veterans Day

Mrs. Tarwater wasn’t happy in 1941 when her son John said he was going to leave school to join the military. After all, he was in college on a basketball scholarship and headed for a good career in his chosen sport. He was the only son of a farming family and that would keep him safe from any military draft, but Tarwater wanted to go. 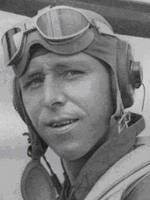 Lt. John Tarwater in his aviator gear during World War II. This photo appears on the website that describes Tarwater’s efforts in earning his prestigious Navy Cross April 17, 1945.

He said the bombing at Pearl Harbor on Dec. 7, 1941, made him mad, and he was determined to go in spite of his mother’s objections. He entered the recruiting office and saw a Navy representative on the left and an Army rep on his right. He said the Navy guy was the first one he reached.

Four years later, Tarwater earned the Navy Cross (the Navy’s highest honor), the Distinguished Flying Cross several times and a chest full of others. He was a pilot assigned to the USS Lexington and later to the USS Yorktown aircraft carriers. Dodging enemy flak and kamikaze pilots was a daily event for him. But before all that started, he was just a farm boy from Kansas who attended a one-room school from the age of 7, with no greater aspirations than playing basketball.

When his Navy career began, Tarwater was anxious to get to the South Pacific to make his statement, but first came training. He gained a spot in a V-5 program where the Navy selected the best and brightest to attend college for a while and then attend flight training. A couple of days before Christmas in 1943, Tarwater received his shiny new wings that designated him as a Naval Aviator but he wasn’t sent to the South Pacific. No, his mission was to fly new Douglas Avenger TBMs and F-6Fs from the New York plant to San Francisco.

But ferrying planes across the country was not what young Tarwater had in mind for his role in the war. He wanted to be in the South Pacific. He said he found a sympathetic ear in San Francisco after landing one of his new Douglas planes. He said he told the exec there that he could be doing much more than ferrying planes and before long, he was assigned to a flying combat group being formed in Pasco, Wash. From there, the group would catch a troop ship and go to Maui Naval Air Station in Hawaii. In December, they boarded ships for Ponam Island in the Admiralty Islands.

By February 1945, Tarwater found himself included in the Admiral Marc Michner Carrier Group 58. He described how it was on board the USS Lexington on Feb. 16 as pilots and crew readied for a bombing attack on a Japanese aircraft factory 80 miles north of Tokyo. This was the day he earned the first of several Distinguished Flying Cross awards.

He said he was “freezing” aboard the carrier having sailed from two degrees below the equator where the temperature was 100 degrees and the humidity to match. They were now just a couple of hundred miles south of Tokyo where it was winter. They were “about to make history with the first strikes on the Japanese mainland since Jimmy Doolittle’s famous Tokyo raids in 1942.” Tarwater said he couldn’t sleep in his bunk and at 2 a.m. He finally gave up and headed to the “ready room” in search of hot coffee. When he arrived he discovered there were others just as restless.

They were to launch at 5 a.m. in their TBM Avengers laden with four 500-pound bombs headed 80 miles north of Tokyo to bomb the Nakajima aircraft plant. Everyone knew it was a dangerous mission, and the normally boisterous pilots were unusually serious on that morning.

Tarwater said he remembers the weather being overcast that morning as he and the Torpedo Squadron 9 flight arrived over the target area. “Flying instruments in formation with wing tips just a few feet apart is not for the faint of heart,” Tarwater said. “We started our letdown and broke out at about 1,000 feet, and the Japanese had a greeting committee waiting.”

Tarwater’s citation states, “As pilot of a carrier-based torpedo bomber, he pressed his attach through intense and accurate anti-aircraft fire to score direct hits on the target, causing extensive damage. During the attack, two planes in the formation were crippled, and the entire flight thereby was forced to proceed at reduced speed under constant attack by enemy fighters. In the resulting air battle, fought across 80 miles of the Japanese homeland, his courage under fire and superior airmanship were at all times in keeping with the highest traditions of the United States Naval Service.”

By the following April, Tarwater was aboard the USS Yorktown because the Lexington was taken in for minor repairs. He described the activities of April 17, the day he earned the Navy Cross. “The Yorktown’s smoke-filled ready room quieted as the skipper on that morning emphasized that a remnant of the Japanese fleet was still out there and he intended to find and sink them,” he said. There were no bombs on this mission. The torpedo was the ordinance of choice.”

Tarwater said they climbed through overcast skies and were skimming along the tops of lily white clouds in loose formation. “The skipper signaled for a penetration descent and down we went,” he said. “Breaking out at the bottom of the overcast, a huge ship filled my windscreen.” He said he was surprised with the enormity of the target but he fired and hit it dead center.

His Navy Cross citation states, “Flying by instruments through a heavy overcast, he broke through the clouds only to be caught in a cone of intense anti-aircraft fire. Notwithstanding, he pressed home his attack to point-blank range and scored one of the five direct hits which caused the vessel to roll over and sink a minute later. While retiring, his plan was subjected to continued and intense anti-aircraft fire from the cruiser and an escorting destroyer, but, by superior airmanship, he brought his plane and crew through unscathed. His skill, daring and utter disregard for personal safety were in keeping with the highest traditions of the United States Naval Service.”

By the end of World War II, Lt. Tarwater had earned 13 medals and a large number of ribbons and logged more than 2,760 flight hours and 164 carrier landings.

But his service to the Navy wasn’t finished. He was stationed at San Diego where he continued flying as the player-coach of San Diego Flyers basketball team. “We played the Globe Trotters and the famous Goose Tatum,” he said. 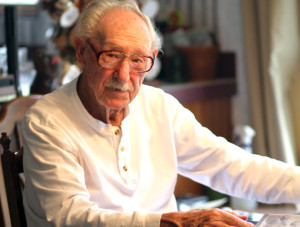 John Tarwater at his home in Bonham tells his remarkable story of life as a Navy pilot in World War II.

Currently, John Tarwater lives on a quiet property adjacent to Lake Bonham. He’s retired from a successful career in the newspaper business and served eight years as a member of the Silver-Haired Legislature of Texas during which time he was named the 2003 Fannin County Senior Citizen of the Year.

He’s recuperating from a stroke he suffered less than two years ago and said he gets really good care from his son, Douglas Tarwater. “I’m in a program that allows veterans to stay in the home,” he said. “A nurse comes every two weeks and a doctor comes by once a month to see me. The nurse is on call for anytime I need something. They treat me super.”

If you know a veteran, get him or her to tell their story. They all have one worth hearing and remembering.  #tellaveteransstory #thankavet #honorveterans

This story by Joyce Godwin appeared in the Herald Democrat November 10, 2013.